November 13, 2012 by The Animal Health Foundation 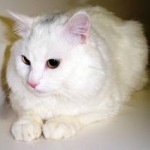 Feline acne, which is associated with overproductive sebaceous glands, usually appears on the chin, according to veterinarian Keeley McNeal. If the cat responds with rubbing and scratching, it can break the skin, causing a bacterial infection with draining skin pustules. If acne is caught early enough, applying topical benzoyl peroxide may clear it up, according to Dr. McNeal, but more advanced lesions require antibiotics, and she said it can be difficult to catch an early case of acne. “Cats can be pretty good at hiding it until they’re really miserable,” Dr. McNeal said.

Because Smokey, 9, has such dark gray fur, his owner Nanette Goode of Joliet didn’t see the bumpy rash, but she could feel it.

So she researched his symptoms online and discovered Smokey had feline acne, which she treated with apple cider vinegar, as opposed to the traditional remedy of benzoyl peroxide.

“Getting a cat to comply with peroxide more than once is hard,” Goode said.

Within two weeks, Smokey’s acne had healed to a scab. Goode then eliminated what she believes caused the outbreak—his plastic food bowl—and replaced it with a stainless steel model.

“Bacteria can get in the scratches and grooves in the plastic,” Goode said, “and that can get on their skin when eating.”

Dr. Keeley McNeal at the Animal Care Center of Plainfield said feline acne often appears worse than it really is. It typically presents as little lumpy blackheads on a cat’s chin. Affected cats may look as if they’re stopped grooming themselves.

Feline acne is not breed specific, nor does it necessarily run in families, McNeal said. Certain cats may simply experience overactive sebaceous glands.

These glands produce a substance called “sebum,” which waterproofs hair and keeps skin supple. Allergic cats are at greater risk for developing it, possibly because their skin is already inflamed.

If the acne itches and the cat responds by rubbing, scratching and licking it, the chin may also become infected and painful. If the chin turns red and/or oozes pus, the acne will require antibiotic treatment. Otherwise only topic treatment with benzoyl peroxide wipes may be sufficient. Catching the acne before it reaches that point may be tricky.

“Cats can be pretty good at hiding it until they’re really miserable,” McNeal said.

The acne should heal in two to three weeks. If not, the cat might have an underlying condition (such as feline herpes, which can lower the immune system), a recent chin injury or another disorder.

For instance, indoor/outdoor cats that enjoy hunting can wind up with ulcers on their chins and lips from mites they pick up while eating mice.  Infections that don’t clear up should be smeared under a microscope to rule out possible fungal infections. Certain skin parasites can also resemble feline acne.

Pale and white cats that like to lie out in the sun are especially prone to developing squamous cell cancer. An affected cat’s ears and lips will appear sunburned. A skin biopsy can detect the presence of skin cancer. See your veterinarian any time a wound does not heal.

Although feline acne is unsightly, cats cannot pass it onto humans or other cats in the household. There is also no way to prevent it, but feline acne will also not limit the cat’s day-to-day life or prevent it from participating in any special events.

And, unlike humans, cats won’t sit before a mirror brooding about what the other cats are thinking about their appearance.

“They can still go to prom,” McNeal said with a chuckle.